In 2019, PAHO celebrated the 25 year of Core Indicators publication. It all started in 1994, when work in PAHO headquarters began to prepare and assist the Member States and PAHO/WHO Representative Offices in the production of the first regional basic indicators publication, published in 1995.

In 1996, several meetings were held to discuss the definition, collection process, and categories for the core data, their use in the preparation of country profiles, and the methodologies for health situation analysis. An Interprogrammatic Consultative Group on Core Data and Health Analysis was formed to implement the regional plan of action and stipulate the content, definitions, and sources of the indicators. The Group also set up mechanisms for collecting and validating the data and for studying and monitoring the implementation of the process in general. Consultations were also made to all the Representative Offices to consult with and inform them about the Regional Initiative.

In 1997, the Executive Committee and the Directing Council of PAHO/WHO respectively adopted Resolutions CE120.R7 and CD40.R10 on the Collection and Use of Core Health Data and recognized the regional effort to consolidate an automated technical information system in health that would facilitate speedy access to basic information on the health situation of the countries of the Region.

Ever since its beginning, through the Collection and Use of Core Health Data, PAHO aims to evaluate the health status of the population and health trends, providing an empirical basis for identifying the population groups with greater health needs, stratifying epidemiological risk, determining critical areas, and examining the response of the health services to provide input for policy-making and setting priorities in this field.

The goal of the Regional Core Health Data and Country Profile Initiative  (RCHDI) is to increase the capacity of PAHO/WHO to generate the knowledge that will make it possible to describe and explain the health situation and health status of the population of the Americas and to select health interventions that are equitable and efficacious.

National core indicators that provide information at local level on demographic and socioeconomic characteristics and its health status and risks have proven to be key to identify and monitor health inequality.

Highlights the importance of the rapid transformation our Region has experienced in the last 25 years. These key demographic indicators provide valuable context to better understand the population’s characteristics and their impact on health. Brief narratives accompany the graphics to highlight important information.

Presents trend data for health indicators of interest within the topics of life expectancy, mortality, communicable and noncommunicable diseases, and risk factors. This section highlights remarkable strides in improving the population's health within the Americas, while at the same time observing that there is still much more work ahead.

The information in these tables reflects the data obtained from the 2019 round of data collection, reported from countries and territories, and UN Inter-Agency estimates. Table footnotes and notes in the appendixes provide the source and the years covered for the corresponding data.

Since its launch in 1975, the publication Health Situation in the Americas: Core Indicators has provided the most recent information on the main health indicators for the Region of the Americas.

Readers are advised not to compare data series between printed editions. The current Core Indicators supersedes that of previous print editions. 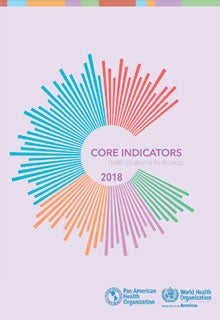 The 2018 edition includes information on the 82 basic indicators of the countries, territories, and subregions of the Americas, categorized as: demographic-socioeconomic, health status, risk factors, coverage of services, and health systems. Information is also presented for 22 indicators of the Sustainable Development Goals (SDGs). As part of a monitoring and evaluation process, indicators are an essential element in the production of health evidence since they facilitate the decision-making process. With advances in technology, data collection has become more frequent and timely, making routine monitoring and follow-up possible at the global, regional, sub-regional, national, and sub-national levels. 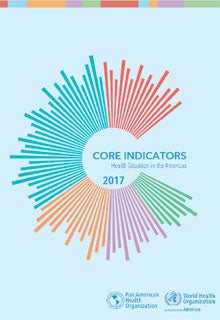 This edition includes information on 82 basic indicators of the countries, territories, and subregions of the Americas, which are grouped into: demographic-socioeconomic, health status, risk factors, coverage of services, and health systems. Information is also included on 17 of the 27 indicators of Goal Three of the Sustainable Development Goals (SDG), which aim to ensure healthy lives and promote well-being for all at all ages. Obtaining and maintaining quality data is a challenge and remains a critical task for all of our countries. The data presented in this publication were collected by the countries and validated by the technical entities of the Bureau. 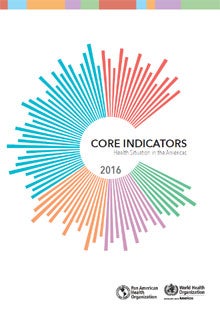 This year, as part of the analysis, the publication addresses three current regional challenges: a brief analysis of the unconditional probability of dying prematurely from the four main non-communicable diseases (NCDs) in the Americas since this group represents a great challenge for the social and economic development of the Region; The notable differences in the quality of mortality information, measured through the indicator of unhelpful causes of death, which firmly underline the critical need to strengthen vital statistics in the Region; and the inequality in health of life expectancy at birth, alerts about the substantial differences between the countries of the Region. 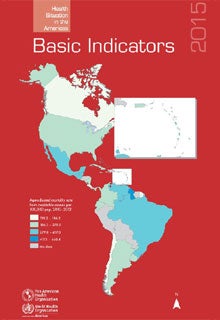 This year the outstanding issue is preventable premature mortality, or "avoidable mortality" that quantifies premature deaths -before 75 years of age- that should not occur with the presence of timely health care measures and policies and programs. aimed at prevention. In 2010, nearly 2.2 million preventable deaths occurred in the Americas, 63% of them among men (1.4 million). By sex, important differences are observed according to the type of preventable causes: among men, 70% of deaths corresponded to those considered preventable deaths by preventive measures, and among women, the proportion was 53%. 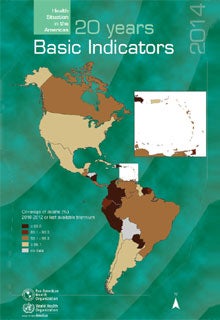 This year marks the 20th anniversary of the launch of the publication “Health Situation in the Americas: Basic Indicators”, through which the information available on a set of basic health indicators of the Region of the Americas is continuously updated on an annual basis. Americas. To highlight these efforts, this publication emphasizes the analysis of two demographic phenomena such as births and deaths; in whose production at least two institutions are involved that respond to different demands of society. On the one hand, the health systems, and on the other, the civil registries.